The National Museum of American History has been criticized for its $85 million renovation that was completed in 2008, that some say was a failure. Though there are still debates whether the new renovations have improved the space or caused more problems there is definitely something to be said about the poor lighting throughout the museum. After a recent visit with lighting designer and specialist Charles Sthreshley, we found that the museum has spent hundreds of thousands of dollars on the lighting. One of the problems is the lighting design lay out. The other problem is the amount of different light bubbles(lamps) and fixtures used throughout the museum. With only one or two people on staff to keep up with the lighting and over 1,000 different lamps used, it is impossible to keep up with the entire museum, which is why you find in many exhibits the lights are out. But back to the design lay out, when you first enter the museum from Constitution Ave and take either a right or left to enter the exhibit spaces, you feel as though you have just stepped into an airport terminal. This is because of the fluorescent lights above which are enclosed in a covering that has to be removed by a contractor. So yes, you’ve got it, that means every time a light goes out they have to call in a company to remove the cover to change the lamps… great idea right!? Also, in this same space if you look up running along the walls you will find about 100 PAR lamps on either side that are turned off. Why are they off you say??? That’s because someone ordered all the wrong lamps which are around $7-15 a piece and to access the fixtures to change the lamps because of the placement of the fixtures means going into the ceiling… big ordeal not a quick fix.

So right there you can see just entering the museum thousands of dollars were wasted on poor planning.

Then once you are in the exhibitions, you will notice many fixtures are not aimed properly, many text panels and label are in the dark almost unreadable. There is a reason you start to feel tired and drained after being a in a museum. Some has to do with standing and walking, but a major factor is the lighting in the space. If the space is very dark with bright harsh lights and you have to strain to read you will become drained much faster than a place with proper lighting. It was very fascinating to walk through the museum with a professional and notice how poorly the spaces were lit and planned. When comparing it to a museum like the National Gallery of Art, who is known for having excellent lighting, it’s amazing how much better the artifacts look and how you feel when you are in the NGA exhibits.

So, next time you go to an exhibit think about the lighting around you, you will be astonished at how “good” lighting can change the whole experience for the visitor.

Below are the best and the worst from NMAH…

Note: the Star-Spangled Banner exhibit is part of the renovation 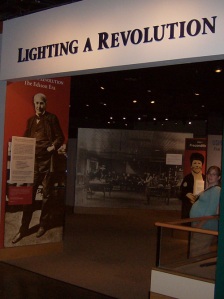 This entry was posted in Exhibitions. Bookmark the permalink.